I can handle 2+2=4 well enough, and even some long division without a calculator, but higher math—differential equations, divergent series, multivariable calculus—makes my head hurt.

So I had a conflicted experience last week when I stumbled across something called the Dirac Delta Function. Named after Paul Dirac, a physicist and sort of ‘Original Gansta’ of quantum theory, the function is a math equation that yields zero for every number you plug into it, except when you plug in zero, in which case the answer becomes infinity!

Infinity only occuring at zero… I had no idea exactly what it all meant, but I smelled a parallel between the Dirac Delta Function and religious mysticism. Buddhists consider the true nature of things to be sunyata—emptiness. And Kabbalists describe God as ayin—a ‘nothingness’ (zero) with infinite potential to become anything and everything.

I called a friend, Dawn Porter, Ph.D., University of Southern California math/statistics professor and co-author of the fabulously exciting text, Basic Econometrics. I begged for tutoring, and she generously obliged.

Here’s what I learned: 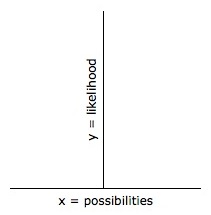 The Dirac Delta Function yields a graph in which almost all values of x register a zero value on the y axis, which means there’s no chance of any of those possiblities coming true. The only value of x that gets any action is x=0. At x=0, the y value becomes infinity. So, paradoxically, when x is nothing, when there’s no possibilities at all, everything suddenly happens!

The darkest hour is just before the dawn… (No pun intended, Dawn!)

Here’s a cool animated GIF to illustrate that graph, courtesy of Wikipedia:

Now… Mystics the world over believe there’s a proportional correlation between ego and God. The more we identify with our self, our ego, the less room we have inside us for God. Thus, the more we empty ourselves of self-oriented wants and motivations, the more space divinity has to move into us and exercise its wants and motivations, which are always loving and groovy. Then we become Godlike.

With that in mind, let’s reconsider the animated graph, above. Imagine the horizontal x axis is your ego—your sense of self. Now imagine the verticle y axis is God. The Dirac Delta Function says that when x=0, when you become nothing, the value of God for you becomes infinite! But when you have any other value than zero, whether positive or negative, the possibility of God vanishes: When we concern ourselves with ourselves, divinity just can’t find good living space inside us.

I’m a born again math convert now… The Dirac Delta Function saved me! How about you?