My teaching gigs have ended until fall so I’ve been busying myself composing and songwriting-for-hire. After months of obeying a firm academic schedule, setting my own hours again has been making me feel a bit random and chaotic. Which, of course, has been making me consider chaos theory…

Chaologists have discovered a cool thing: seemingly random motions—turbulence in the air, water spiralling down a drain, etc.—are actually highly patterned. Processes that look unpredictable can thus be forcast, to an extent. It’s a comforting revelation. Look deeply enough into chaos and order emerges. There’s structure there. And when this kind of ordered chaos is plotted on a graph, it yields a beautiful shape called a Strange Attractor, which looks like this (see right, and/or above on mobile).

This graphic illustrates how chaotic systems behave: They loop again and again around a given point, never exactly repeating their route, but always staying bounded in orbit. Then, suddenly, they jump to another orbit around a different point! Ultimately, chaotic systems bounce between these two “attractors,” looping around them in an infinite dance between yin and yang. Every cycle is different (hence, randomness) but bounded within a pattern (hence, order).

In my professional life, music and spirituality/science are my two attractors—the points around which I orbit. And sometimes I need a break from both. Vacation! Even just one evening’s pit stop in the rat race around my Strange Attractor can set me right again.

Last night I decided to take an at-home vacation. I turned off the phone, disconnected from the internet, and rummaged through the pantry in search of cookies. And in the very back of the cabinet I found… Palmiers.

Palmiers are pieces of puff pastry folded over themselves a bunch of times, sprinkled with sugar, and baked until golden. They look like this: 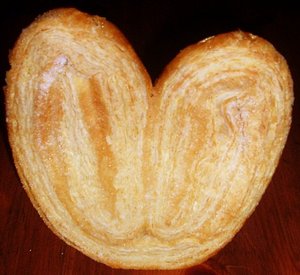 And so my vacation ended prematurely, as I felt compelled to write this blog. Resistance is futile?! May as well enjoy the loopy ride.

So now I’m back to work and wondering… What are your attractors—around which points do you orbit?

There are no comments, add yours